Are you planning a trip to Vienna before Christmas this year? Or maybe an Easter trip to Vienna in 2023? We have now published the dates for the Christmas markets in 2022 and for the Easter market in 2023 here in our Vienna Guide.

We haven’t updated our Vienna Guide frequently in recent years, mostly due to COVID. But, now that life is returning to normal, it is time to welcome tourists to Vienna once again.

Are you ready for a trip to the spectacular and wonderful city of Vienna?

The earliest Christmas markets in Vienna will open on November 11th, while the biggest and most popular markets at the Rathausplatz and at Scönbrunn will open one week later.

What about the Easter market?

Two and a half months after the New Years Market at Schönbrunn has closed, it is time for the Easter Market that will open on March 25th in 2023. This will remain open for 1 1/2 weeks, and it is a fantastic way to enjoy a market with a nice atmosphere, combined with the wonderful surroundings of the Schönbrunn castle!

Would you like to know more about these events?

We wish you a pleasant stay in Vienna!

Austria is coming to Euro 2020 with some great players and with a good chance to qualify for the knockout stage. The truth is, many expected Austria to perform well in Euro 2016 as well, but then they ended up last in their group, and it all started with a 2-0 defeat against their neighbors from Hungary. Will Austria play better during the European Championship in football in 2021? When will Austria play their matches? Where will Austria play? You will find all this and more information in this article!

But, who will Austria play against this time? Do they have a better chance than in 2016?

During the European Championship in football in 2016, Austria had to play against Iceland, Portugal, and Hungary. It didn’t sound like a hard group before the tournament, but Austria still ended up at the last place.

What is interesting about the group is the fact that Ukraine, Netherlands, and Austria often remind us of a rollercoaster. On a good day, they are on the top and play awesome football, but on the next day, they are at the bottom and play lousy football. As a result, this group is a very open group and I believe anything is possible.

When and where will Austria play their matches?

The European Championship in football in 2021 will be played all across Europe. But, there will not be played any matches in Austria, meaning that the Austrian team will have to travel to other destinations in order to play their matches.;

It is quite interesting that once again Austria will play against the potentially “weakest” team in the group in their first match (just like in 2016). Hopefully, Austria will get a better start on the tournament this time, because it is needed for the atmosphere in the team to get right from the first moment on.

Where will you watch the matches?

Austria will play their matches during the group stage in Amsterdam and in Bucharest. These are both cities that will only allow the stadiums to be used at 25% of the capacity. That might be a little disappointing, but it is still way better than playing in front of empty arenas.

So, where will you watch the matches? Will you be watching them at home on your TV, will you sit in front of a computer and stream the European Championship in football online, or will you find a local pub or a big screen somewhere and watch the matches there?

And do you believe Austria will perform better during the European Championship in 2021 than they did back in 2016? I would love to hear your thoughts!

We are constantly working to make our Vienna Guide interesting to all people coming to Vienna. That is why we have just added a calendar to our website.

The Vienna calendar isn’t complete at all, but it does contain information about important events in Vienna such as the annual Christmas markets, the Easter market in Schönbrunn, the national day on October 26th, and even the Austrian Grand Prix (the Formula 1 race in Spielberg, not far from Graz).

You can find the Vienna calendar right here. 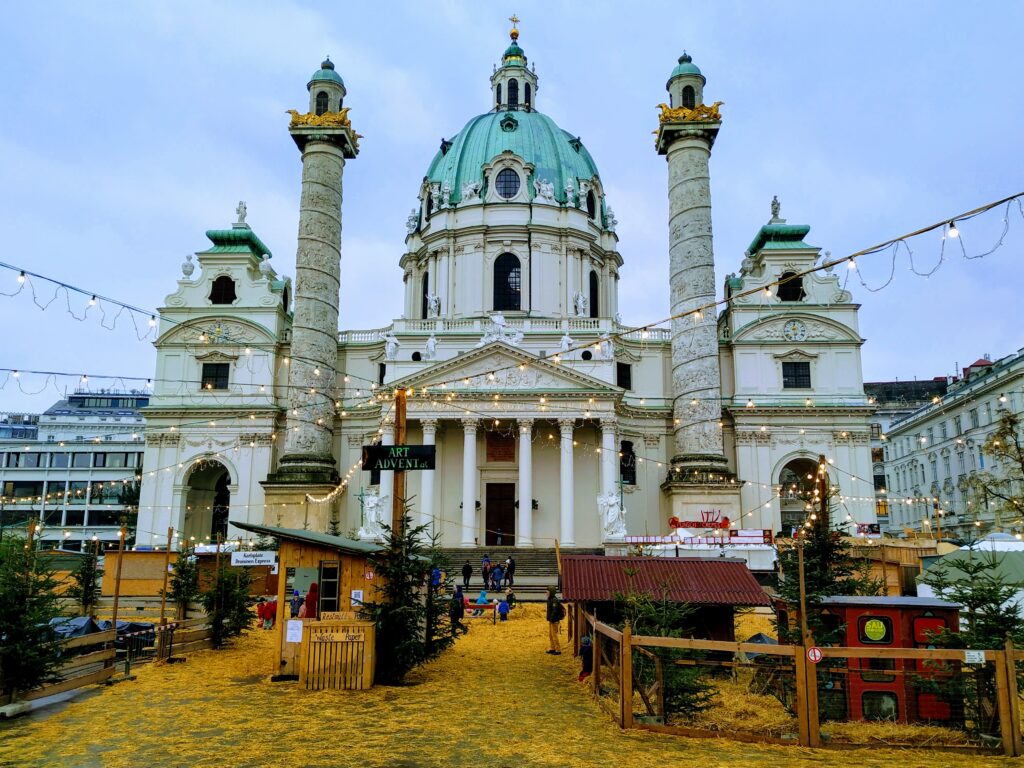 The city of Vienna turns into one giant Christmas market every year in December. You can find Christmas markets everywhere, but some of them are more famous than others. Do you have a favorite? Write a comment and let us know!

But now, enjoy these pictures from the Christmas markets in 2019.

Don’t you feel like visiting Vienna after watching these pictures? That is easy to understand!

Are you in for some action and adrenaline while in Vienna? Prater is for sure a place you should visit during your stay.

We have earlier written about how you can get to the Familypark by the Neusiedler see from Vienna. But, you do not have to travel there to get adrenaline and experience some fun. Prater, also known as Wurstelprater, is a fantastic area in the city of Vienna, and here you will find fun for people of all ages. Just take a look at the fantastic ride at the picture beneath.

The Olympia Looping is one of the most famous rides available in the park. It has been rumored that it will retire soon, but it is still there, and you better try it if you like such kind of rides. It first saw the light of day in 1989, and it has been at several locations in Europe before it ended up in Prater.

The price for a ride is 8,50 Euro, and for this money, you will get one minute packed with action. There is a total of 5 loops during the ride, and the highest speed during the ride is 100km.

Since you buy tickets individually for all rides in the park, there is normally no line and you can go ahead and enjoy a ride at once without standing in line!

Does this look like a nice ride to you? We have tried it… it’s amazing!

Are you going to visit Vienna and dream of spending a lot of time in Mariahilferstrasse, the most popular shopping street in Vienna? NH Hotel Wien City might be exactly the hotel you are looking for!

NH Hotel Wien City is a four-star hotel, located just by the popular shopping street. The hotel doesn’t have their main entrance from the street, but walking through a short tunnel you can get to the main entrance, and living in the hotel, it feels like you live in the shopping street. 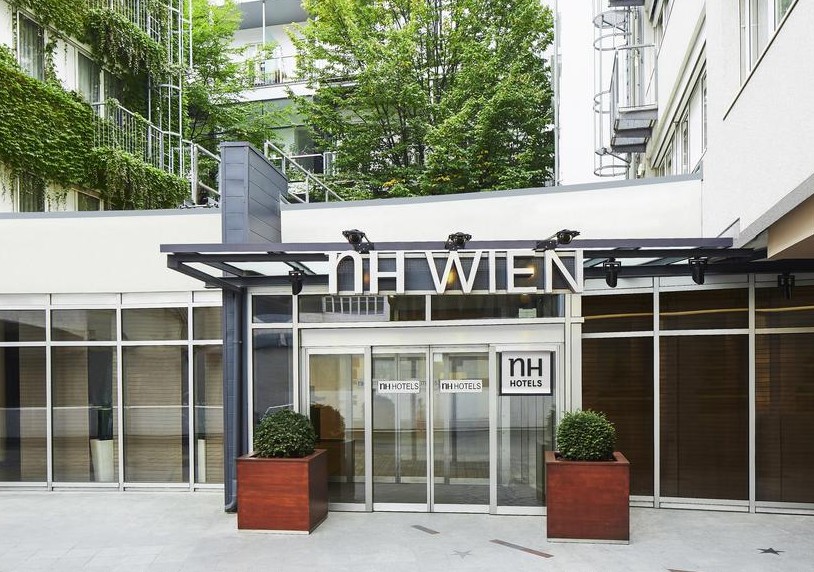 The hotel is perfect if you want to spend most of your time outdoors, but if you are looking for a hotel with lots of indoor services, you should probably book a room somewhere else. But, as a four-star hotel with a perfect location in Mariahilferstrasse, this hotel will be more than enough for most people.

The rooms are nice (and not that small), and the people working in the reception are nice. The hotel has a parking lot available, but they do not have space for lots of cars, so you might be unlucky and discover that the parking lot is fully booked upon arrival.

The biggest minus with NH Hotel Wien City

Before arrival, we read that NH Hotel Wien City has splendid free WiFi available in the hotel, but that is very far from the truth. They have free WiFi, but it is so slow and terrible, that I would not even dare to call it free WiFi. It reminded me of the days when I used a modem to connect to the Internet, only slower. There were times when I couldn’t even download my emails due to the speed.

There was, of course, a way to get faster Internet, but you would have to pay 10 Euro a day for that service. In other words, what NH Hotel Wien City call free WiFi is similar to calling a dog-poop a chocolate.

The hotel was perfect for some days of shopping and sightseeing in Vienna. We had a great stay, and we would have no problem returning. But, the WiFi was a big disappointment, so if that is important to you, prepare to pay or to live somewhere else.

This is a fantastic panorama night shot of Vienna. It might not be as impressing as this shot made in Budapest, but it is still amazing. If you haven’t been to Vienna yet, this image might inspire you to come and to pay the city a visit.

Read more about all the goodies Vienna has to offer here in our Vienna Guide.

The fantastic Christmas markets will return to Vienna again in 2018. Here are the most important dates and some useful information.

Have you got any questions related to the Christmas markets in Vienna? Write a comment and we will do our best to help you out!

Are you considering a stay at the Marriott Hotel in Vienna? Here are some stuff worth knowing before you make your booking! 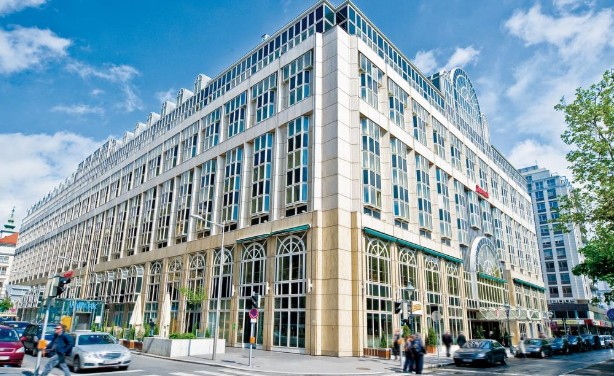 The Marriott Hotel in Vienna is located next to the Stadtpark, a beautiful area for a nice stroll and also an area with a nice playground area for kids. The most famous restaurant in Vienna might be “Steirereck im Stadtpark“, a two-starred Michelin restaurant. This is also located a few hundred meters from the Marriott Hotel entrance, making it very easy to visit the restaurant during your stay at Marriott.

So yes, Marriott is a five-star hotel in Vienna, but it is worth knowing that the standard is different from some of the other five star hotels. As you walk from Marriott towards the Opera-house you will pass by Grand Hotel Vienna and Hotel Imperial. You do not need to look hard to understand that those hotels are more elegant and luxurious than the Marriott hotel. So, if gold and glory are important to you, then the Marriott hotel might feel a bit old (on the outside). 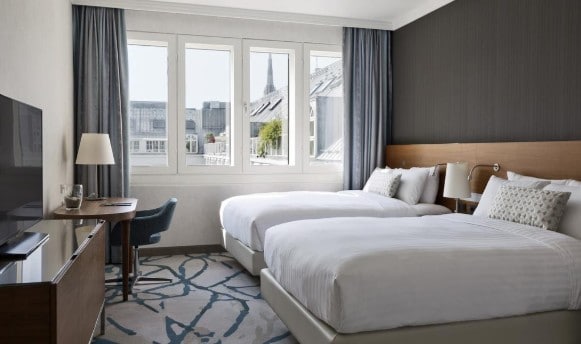 But, the Marriott hotel gives you whatever a normal five-star hotel should. The staff is nice and polite, the rooms are spacious, and unfortunately, you will have to pay for the Wi-Fi (in most situations). This is worth knowing about, and if you ask in the reception, they might give you information on how to get free access to the Internet, but in general, this is a service you will have to pay around 13-14 Euro for (per day).

The breakfast in the Marriott hotel is delicious. The price is 35 Euro per day per person (if it isn’t included already in the price). Here you can sit in a nice environment and enjoy a glass of champagne while eating the omelet prepared for you by staff upon request from you. Yes, they are preparing it for you (in front of your eyes), and you even get to say what sort of ingredients you want to add to the omelet (mushrooms, bacon, onion, cheese, tomatoes, peppers etc.)

If you want to walk from the Marriott hotel to the Stephansdom, it can easily be done. You don’t need to walk more than 5-10 minutes, and you will find yourself in the Kärtner Strasse (one of the famous shopping streets in Vienna), and this leads you to the Stephansdom.

Want to read more about the best five-star hotels in Vienna? Check this article written by us a few years ago.