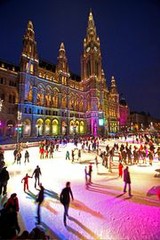 Since January 24th and until March 9th the legendary and fantastic ice skating rink will be running in front of the City Hall in Vienna. Do you have some skates to bring with you, come along and try the ice. If you have arrived to Vienna without skates, borrow some skates on the spot and try this fantastic activity in Vienna!


The area in front of the City Hall of Vienna hosts one of the most beautiful Christmas markets in the world from late November until the end of December every year. Then there is a small break, and then from the end of January the traditional ice rink comes to the square and fills as much as 7000 square metres with ice. The longest track on the square gives people the chance of skating as much as 750 metres on the ice, absolutely worth trying.

So, if you are in town and have time, visit the City Hall, or at least the square in front of it, and enjoy a really cool visit to the ice rinks. They are open from 9 in the morning until 22.00 in the evening.