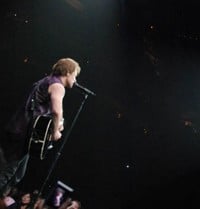 When Ernst Happel Stadium is used as a concert venue it means that a real hotshot is on the way. That is why we can promise that it will be a spectacular concert as Bon Jovi enters the stage at Ernst Happel Stadium July 22nd, 2011. If you want to check out Bon Jovi live, and maybe be laid on a “bed of roses”, then this is your chance as tickets still can be bought for this magnificent event online today. Check it out and read more about other Vienna concerts.