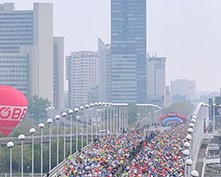 The Vienna City Marathon will take place again in the middle of April in 2015 which is considered one of the best races in Europe.

Vienna is the capital and also the largest city of Austria. Vienna is the most important cultural, economic and political city of Austria and it also gives home to several organisations and events through the whole year. Every year the city offers the best programs, activities such as concerts, markets and marathons. This year in April the annual Vienna City Marathon will be back in town again. The Vienna Marathon leads through the most beautiful historical and cultural attractions in the city.

The route of the marathon starts at the new and modern part of the city right at the United Nations Building then the runners cross the Reichsbrucke bride and the famous river Danube. The race then continues in the historical city passing the most beautiful spots in the city including the City Park, Vienna State Opera, the Green Market, Vienna Theatre, Museum of Technology, the Parliament, Votiv Church, Lusthaus and several other spots in the city until the route finally ends at Heldenplatz. This year the Vienna City Marathon will be held on 12th April and the race will start at 9 in the morning. The registration to the marathon costs € 65 and the registration deadline is on 27th March.

If you want to know more on the Vienna City Marathon check this site for more information.

For those who would rather run in Paris, it can be nice to know that on the same day the big Paris Marathon will be arranged (April 12th)