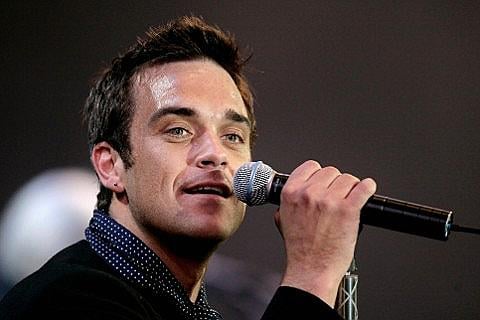 Who doesn’t know the famous singer, Robbie Williams’ name? The popular British star was born in 1974 in England, Staffordshire County, in one of the six parts of Stoke-on-Trent, Burslem.

His parents, Peter and Jan Williams divorced, when their son was only three years old. Robbie’s career has started when his mother found an advertising at the newspaper, what was searching for a man singer to a band. Robbie became the member of the Take That. Despite the popularity, Robbie left the Take That in 1995 because of the internal strife. He made the adaptation of George Michael’s song, the Freedom, and he reached the second place on the British Hits. However he became famous alone too, he started his solo career with lots of ups and downs. Despite he fought against several drug and alcohol problems; he was at rehab treatment too, it seems, nowadays he calmed down. He, the ex-Casanova became a happy husband and father. His loving family consists of his wife, Ayda Field and their child, Theodora Rose.

The fans could be happy, because Robbie gives several concerts in different European metropolises, like in the capital of Austria, Vienna too. Do not hesitate, organize a lovely holiday to the wonderful Vienna with your family, friends and/or love, view the local attractions, the historical buildings, taste the local specialties and finally dance all night at Robbie Williams’ concert at 17 July 2013 at the Tribüne Krieau, Vienna! Have fun!