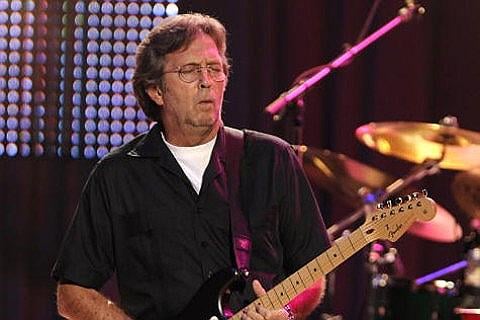 Who is the guitarist who played in The Yardbirds, John Mayall & the Bluesbreakers, Cream, Blind Faith, Derek and The Dominoes? The answer is simple: Eric Clapton.

But who is he? He is one of the best guitar players in the world! In high school, he was the bad boy, later he was going to be that talented musician, who was inducteed three times in the Rock and Roll Hall of Fame. His nickname is „slowhand” and he is from England. In 2013 he is going to start a world wide concert tour, to show everybody, it doesn’t matter how old are you, when it’s rock and roll or blues.

He is a 1945 natal British citizen. His mother was 16 years old when she gave birth to him, because that, his grandparents acted like his parents, and his mother was like his sister. The truth came to light when his real mother has got married and moved to Canada. Eric was just 9 years old. These happenings sealed his fate for a life.

He was always interested in music, especially the blues. He was 13 when he has got his first acoustic guitar, and he has thought play on it without any teacher. He played in the Yardbirds between 1963 and 1965, in the John Mayall & the Bluesbreakers between 1965 and 1966. The Cream-era started in 1966, but because of the band’s short life, it was over in 1968. After he made music in a lot of bands, he started his solo career in the early 1970s.

He is an active musician today too, and one of his tour stops is going to be a beautiful European city, Vienna. Everybody, who can, buy a ticket and enjoy the show of a live rocklegend from the first line. Have a good time!