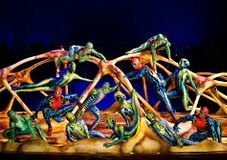 The Cirque du Soleil is Canadian entertaining company which was founded in 1984 in Montreal, Canada. Cirque du Soleil often use animals and it is theatrical so it is often defined as a contemporary circus. All the shows has their own central theme and leading characters.

The Varekai show begins reimagining the story of Icarus in the Greek mythology. In the original story Icarus flew too close to the sun and fell in the sea and died but in Varekai instead of Icarus drowning in the see he falls on a magical island where he meets various exotic creatures in the lush forest.

The Cirque du Soleil Varekai will take place in Austria in Vienna at the Wiener Stadthalle from the 4th November to 8th November in 2015. Tickets for the shows are already available and can be bought from WorldTicketShop.