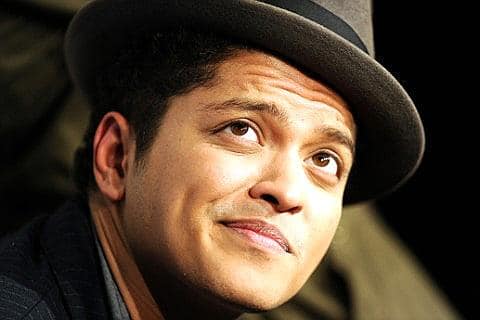 Bruno Mars within his worldwide tour, The Moonshine Jungle Tour, visit to Vienna on 24 October 2013. Imagine a wonderful day trip in Vienna and after that, as the top of the night a huge world-class concert in the Stadthalle, in Vienna.

Bruno Mars, as the original name Peter Gene Hernandez was born and growing up in the capital of Hawaii, Honolulu. He was quite young when he has started to deal with music, it isn’t a surprise, because his father and mother were musician too. When he was young he was influenced by for example Michael Jackson, Elvis Presley, The Isley Brothers and The Temptations. The beginning of his career he was successful Elvis-imitator. In 2003, when he was 17 and after his graduation in the President Theodore Roosevelt Secondary School, he moved to Los Angeles, to builds up his music career.

He picked the Bruno nickname was given by his father and he added the word ‘Mars’ after that. Before he became a successful artist, he was a well-known producer and song writer; he worked for example with Flo Rida, Adam Levome or the Sugababes. As a singer his first appearance was in B.o.B.’s song, the Nothin On You, which released in May 2010, and after that he sang on Travie McCoy’s big hit, the Billionaire. His debut album released in October 2010, the Doo-Wops & Hooligans and it leaded the album sale lists in several country, and he sold six million copies. In December last year he released his newest album, the Unorthodox Jukebox, and there are almost 2 million sold copies in the world.

Visit to Vienna, go for a walk on the Mariahilfer Strasse, and as top off the night see and listen Bruno Mars’ concert! It will surely be an unforgettable experience!